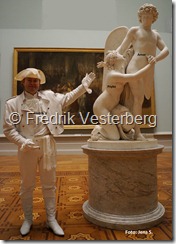 Welcome! In English, Swedish, German and several other languages there is a confusion of what and who amor/Amor is. Amor is a latin words for love. Caritas is another latin word for love. Amor can also mean a god in Roman mythology. Even in ancient time there may have been a confusion.

The concepts Amor/amor, cupid/Cupid, eros/Eros and caritas has often beeb confused with each other. Amor can include sex, but it does not have to include sex. To clarify: I and amorism® highlight that the essence of true love is benevolence. Caritas, often interpreted as english charity, can also include benevolence. Caritas can also be misunderstood for it´s synonyms, but in another way.
The photo shows a statue “Amor och Psyche” from the 18:th century by Swedish artist J. T. Sergel. This is after ancient time art. I don’t know if it’s an example of the mentioned confusion. It could perhaps have been called Swedish Cupido och Psyche, in english Cupid and Psyche; but I dont know the intention with this sculpture. Cupido was a roman God. He is also called Amor. Cupido has a synonym in latin meaning desire.

We use the word amorism as a name. Like Apple is used for computers. There may be different synonyms/meanings. It is a big difference between giving an Apple instead of apples to computer lovers. Apple has got another meaning i recent time since year 1976. Before it was only about fruit. Since 2012 Amorism® means something unique, namely our philosophy and religion. We are not opposed to sex. But the intention with the word is for us mostly benevolence.

This article shows my tries to improve the understanding of the latin word amor. It may be so that the confusion has been there for long time or allways, at least in arts about the figures Amor and Cupid. Perhaps is my talk about ancient/classic time to positive, that there was less confusion then? Perhaps I gave a too hight status to humans understanding of the god Cupido/Amor in ancient and classic time? So don’t pay too much attention to this article. The only that I think is important is what I said above. And that´s the aim of this article, and what it started with.

Some links to English articles

A) Total benevolence
B) English definition of Amorism

Hint. My private belief is: I don't have full confidence in persons who don't venerate the virtues of Amorism. The most important virtue is total benevolence. Amorists don't have to agree with my private belief.

Lägg till kommentar
Läs in mer...